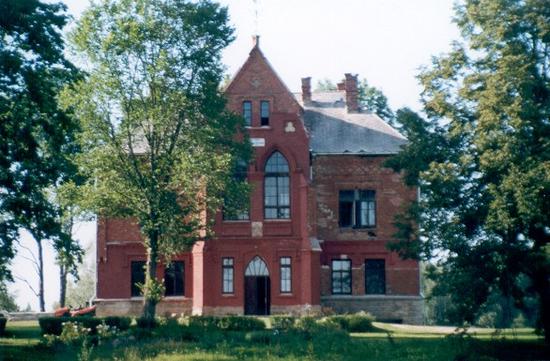 About 130 km east of Riga in southern Livonia is the former Zirstenhoff (Cirsti) Estate. The estate complex is picturesquely set at the bend of the Ogre River, a tributary of the Duna. Approximately 1 km of shoreline is included in the property.

Zirstenhoff, or Cirsti as it is also known, has an interesting background. It was first mentioned in 1340 as a fiefdom of the Riga-based Archbishop to the Baltic-German von Tiesenhausen family. The estate remained with this family until the Swedish governorship of the 17th century. As of 1681, the von Trautvetter family came into possession of Zirstenhoff and then later, in 1764, the von Strandmann family took ownership until the property’s expropriation in 1920.

Magnus von Strandmann and his son Magnus Friedrich Arvid were also the builders of the mansion in 1886. Magnus Friedrich Arvid was a well-known figure in Livonian history. Amongst other things, he was Deputy Mayor of Riga, Vice Marshal of the Livonian Knighthood, as well as the Consistory President of the Livonian Lutheran Church, as well as a member of the last Council of Livonia. He died in Warnemünde in 1926.

The mansion of Zirstenhoff is an impressive example of the Neo-Gothic design of the 19th century. There is a whole range of elements that reflect this architectural style. The preserved 7-axled main building spreads over a 20×15 m space and is a two-storey structure upon a high basement floor. The 3-axled middle risalit sits forward from the façade and is characterised by two huge church-like Gothic windows. Originally, the house had an extended connection to the oldest building, the defense tower at the left of the house, and was almost twice as large.

However, Zirstenhoff was one of the victims of the unrest of 1905, when a number of Baltic mansions were set on fire. Except for a relatively well-preserved barn, all other former buildings of the estate are in ruins. In the 1930s, the underground passageway between the manor house and the defense tower was filled up.

There is a paved square that covers approximately 800 sqm between the former farm building and manor house.

The manor house itself has an already approved refurbishment plan and there are a number of historical building materials available for this project.