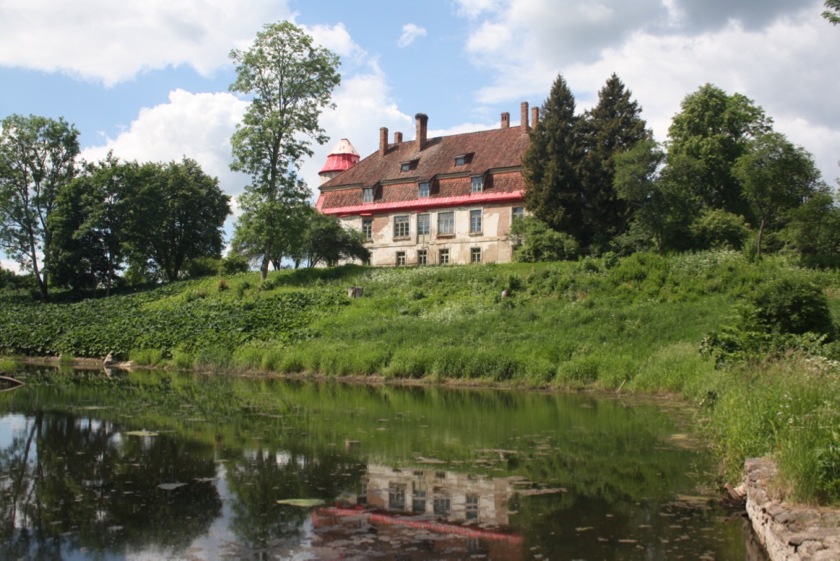 The Wormsathen Estate is located in one of the most scenic areas of Courland, bordered by the hills of Embute and the valleys of Venta/Windau. The mansion of Wormsathen is located about 1 km from Nīkrāce, on the left bank of the Šķērvele River. In fact, the river, known as the fastest in the region, crosses through the property and was declared in 2009 as the purest river in Latvia.

The once-landscaped parkland was originally the largest and oldest in the Baltics, with several mentions in international garden and park catalogues during the 18th and 19th centuries. Directly in front of and overlooked by the manor house, a weir acts a dam and transforms the river into a small lake. In earlier times, a wooden bridge led from the upper floor of the mansion to the opposite bank and further into the park.

As of the 15th century, the estate belonged to the longstanding Baltic family of von Rosen. The von Rosen family eventually lost the estate as a result of the Swedish goods reduction policy and their relationship with Johann Reinhold von Patkul, the defender of the regional nobility’s historical rights. More recent owners were the von Schlippenbach family, who were probably responsible for the construction documented in 1809.

After that, the estate changed hands several times. After the baronies of von Fircks and von Roenne , it finally came under ownership of the von Hahn family in 1856. This remained unchanged until the property’s expropriation in 1922.

The basic structure of the house was probably built in 1568, by the then-owners, the von Rosen family. Despite the reconversion of the house, which took place in 1809, the historical integrity of the house was not changed very much. During the political unrest of 1905, the house unfortunately burned down and was carefully rebuilt under the direction of Riga-based architect, Wilhelm Ludwig Nicolai Bokslaff.

The house is two-storeys with 7-axles and is crowned by a huge mansard roof. At the south gable, a stairwell is attached. The two central windows on the river side, which frame the door (probably the former connection to the bridge), are much larger and add interest to the otherwise conservative façade.

The first upper level is illuminated by 3 large dormer windows and is thus fully habitable.
The house has been extensively renovated in recent years, including work on the roof and attic, beams and studs, new wooden windows, oak doors and stairs, as well as underfloor heating on the first floor. The upper level is also ready for any further extensions.

The complex includes: a gardener’s house (200 sqm), a vegetable storage space (100 sqm), a stable, a barn, a garage for 3 cars, a firewood store, a riverbank sauna, 2 ponds for fishing, a well (80 m) and numerous foundations of agricultural buildings.
The plot has a total area of ​​20.37 hectares, of which 12.37 hectares are park and forest, with 6 hectares of arable land and the 2 hectare estate complex.